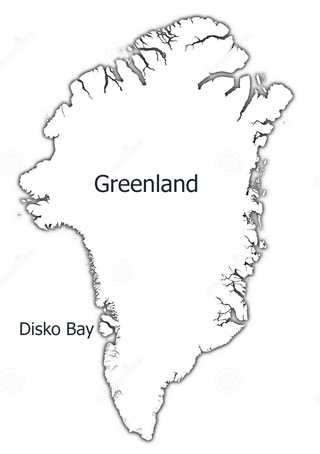 Disko Bay, or Qeqertarsuup tunua as it is called locally, has been an important location for centuries. The first European to discover the habitable west Greenland coastline was Erik the Red who started a settlement in 985 AD. Soon after the settlement was established, the Norsemen traveled up the coast during the summer thaw and discovered Disko Bay. Their were interested in this bay because of the wildlife they encountered: Skins, ivory and bones from walruses, seals, and whales were traded with Iceland, the British Isles, and mainland Europe.

The Inuit hunters in the region used hunting qajaqs that evolved over centuries to suit the sea conditions they encountered along the coast. The Shrike hull lines are very similar to the West Greenland Disko Bay kayak collected in 1927/8 and now at the Canadian Museum of Civilization in Ottawa. It is design 65 in Harvey Golden’s superb 2006 book “Kayaks of Greenland”. Most enthusiasts know that modern British kayak designs evolved from the Illorsuit (Igdlorssuit) kayak , but probably don’t know that Illorsuit is a small settlement close to Disko Bay. Naturally, that area produced a kayak shape that was particular to that small region. Duncan Winning wrote an excellent and comprehensive article on the influence of Greenland design on modern kayaks. Jeff Fabiszewski has written an excellent article comparing the east and west Greenland designs which gives a good perspective on the paddling characteristics of these style hulls. These classic and beautiful lines, the result of centuries of development, produce a hull that is maneuverable, and suited to rough water. The elegantly upward rake of the forward rocker and relatively straight aft keelson look very similar to the “modern” surf kayak designs of the P&H Delphin®. The sharp bow lines will keep you on your toes when surfing. Just like any classic Greenland qajaq the bow will spear the wave ahead and if your concentration lapses a broach will swiftly catch you. The long water line allows comfortable high speeds while touring, yet the rocker and chine lines create a maneuverable shape that will delight while rock hopping.

Greenland style kayaks with hard chines do not behave or feel like a modern rounded hull sea kayak. Jeff Allen recently wrote an article which was published in Ocean Paddler magazine in which he stated:
“Initially the shallow-chined hull will feel a little wobbly. The transition from chine through the centre line to opposite chine will be relatively constant until you reach the mid-point; it will then feel the least stable, but will improve again as you move towards the next chine. ‘Twitchy’ might be the best word to describe it when sat in the upright position. Once on edge the shallow-chined hull will feel more stable and you will be able to perform with stability throughout the edge-holding process with a greater degree of confidence.
The hull shape will not be as fast as the rounded hull shape, but you may have a more stable platform to operate from in dynamic waters where maintaining a more constant edge is required. The edge will also act as keel when it is applied in a dynamic environment to counter the effect of wind or flow.”