The Shrike-R (AKA Shriker or Rotator) is a further development by Christopher from the Shrike Too design. It has two significant enhancements: a substantially lowered deck level (60mm lower than the original Shrike design) and a wider cockpit. Both changes enhance the ease of rolling. The wider cockpit enables the center of gravity of the paddler’s body to be lower during rolls and the lower deck facilitates layback recoveries. This kayak was developed specifically for rolling training and competition and is impractical as a tripping kayak due to its low deck level. With 190lb load it floats with 20mm of freeboard behind the paddler. Due to the reduction in topside height, the length of the kayak is reduced from the original design. However, the underwater shape is identical and so the water line length remains the same, as does the rocker. This results in the kayak performing similarly to the original Shrike and Shrike Too, with the exception of the lower back deck making the kayak more affected by waves on the stern quarters, which tend to grab hold of the kayak due to the lower edge of the gunwale. This can make this a more challenging and lively kayak in big waters. When Christopher constructed this version he did so without hatches or a skeg as this kayak is just for rolling training. Hatches and a skeg could be added if desired. However the extremely low back deck would make it a challenge to fit a large skeg so it would be necessary to scale down the skeg design in the plans.

The Shrike-R is an amazing rolling machine. Due to the low foredeck, wide cockpit and low back deck the kayak feels as if it finishes the rolls for you. She balance braces like a dream with enough stability to read a newspaper if you wanted to. Her ultra-lightweight hull provides little or no resistance to rotation, making rolls effortless.

The Shrike-R is built using a variant of the Shrike Too hull panels and bulkheads. The variations come in the height of the topsides and bulkheads, and the shape of the cockpit. These variations are now included as options in the Shrike template plans. The plan templates, build manual and modifications for Shrike-R can be downloaded here . 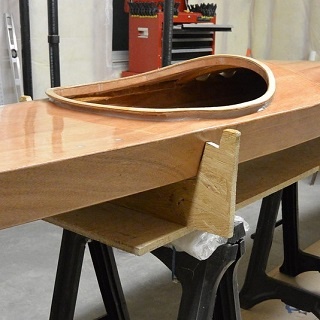 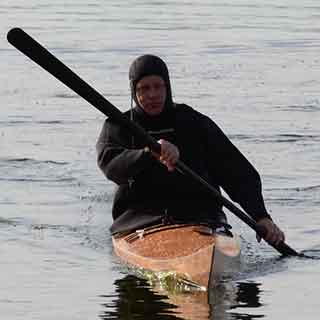