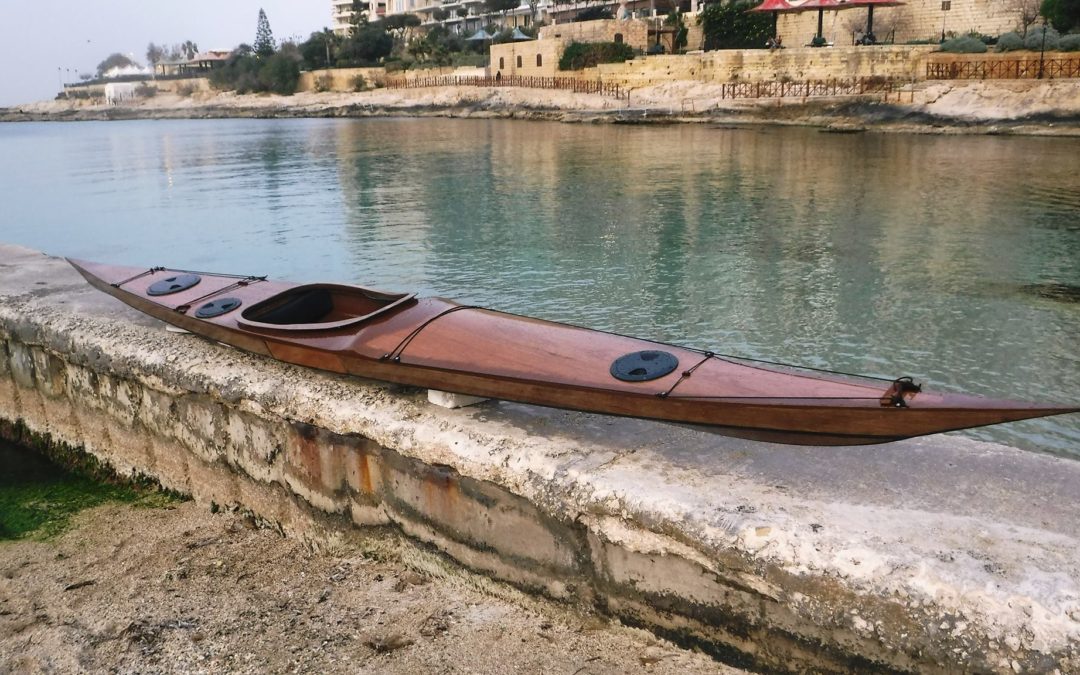 The following changes were made from the normal Shrike:
– Length: my boat is 30 cm shorter coming at only 5 m in length, as I needed a bit more maneuverability;
– Max beam has been reduced from 54cm to only 51, as the boat has been wrapped around my hips;
– A minus 40mm freeboard was chosen to obtain a machine still good enough at rolling but still capable to carry a day payload and to take heavy seas without too much water on the deck;
– The pronounced curvature of the bow and stern has been slightly reduced in order to provide less resistance to the wind;
– The chosen cockpit was a classical keyhole entry type. After 2 SOFs I realized that even being in perfect shape, and having full mobility, an ocean cockpit is still difficult to access in surf, close to a jetty ladder, or when doing a self-rescue. I decided this style was more suitable for the old spray skirts to prevent them imploding. With modern neoprene such a need was useless (never heard the white water blokes complaining about this), and decided to give her the keyhole one (in order to abuse the boat later). However the cockpit’s layout is different from the plans as the masik is shaped to accommodate a forward deck hatch. The shape of it is somewhere between the normal Shrike one and the ocean cockpit Shrike;
– No skeg or rudder has been added. I simply like kayaks…to be simple;
– No Maroske fittings were used. I like reconfiguring the deck from time to time and it is far easier to do it when all the bungees are screwed in place;
– Due to the new masik a forward hatch was able to be fitted.
Construction norms different from the manual / normal:
– Given our very rough and sharp limestone shores I have chosen a 4mm thick hull. The decks are made of 3 mm ply;
– I mounted the decks using screws. I kept the screws there, buried the heads and covered them with thickened resin. Like that, no bondage kinky stuff was needed, and still obtained a clean enough finish;
– The outer glass tapes of the hull-deck joint were deleted. With the screws in place (and I have strong reasons to believe even without) the joints are very strong. I saved some weight in epoxy, given the now heavier hull due to the 4 mm ply;
– The masik was made by steam-bending a piece of oak, instead of laminated ply;
– The cockpit coaming was built using the CLC method of joining 2 semi brackets of 9 mm ply. The rim was built from normal 4 mm ply. None of this was glass taped, only laminated. It also came very strong. It can support the weight of the boat without problems. The tight braces wings were not taped also. Only laminated;
– The rear vertical braces under the coaming were deleted. Given the narrower beam, the remaining stretch of plywood between the gunwales and the coaming proved to be very strong;
– And finally, a different foot brace was created. The bulkhead type one was deleted and replaced with an adjustable system. Two notched pieces of wood, glued on the inner sides provide the base while a piece of wood sliding in the notches provides the foot brace, K1 style.
The final finish of the boat was acceptable enough for clear livery. For practical reasons (to check whenever a cut is too deep or not) all edges were painted.