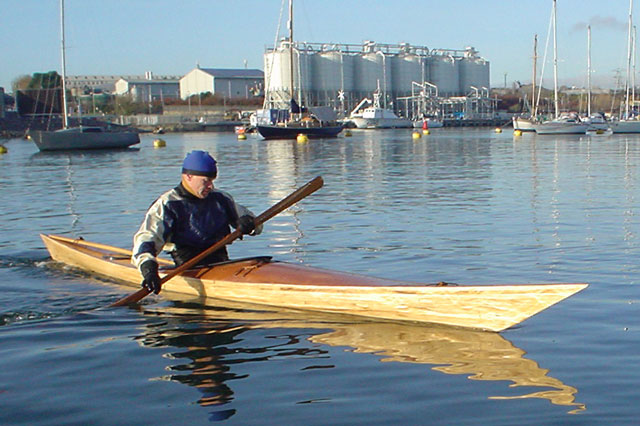 Which Vember model did you choose?
This is the prototype Vember Expedition, with the forms spaced at 330 mm.

What modifications, if any, did you make to the design described in the build manual?
None

What is the weight of the finished kayak?
The finished weight is 37 pounds (16.8 kg)

How does the kayak perform on the water?
I have a shed full of kayaks, but if I had to pick just one, this would be it. Even empty and in a cross-wind, she behaves herself and I’ve yet to really need the skeg. She’s light enough to throw on the roof-rack for an afternoon’s playing, but has the capacity to take a fairly hefty load for trips. The shallow rounded keel allows you to layback fully and this means I’ve been able to hand roll her – a trick I can normally only do in my specialist rolling kayak. She attracts a lot of attention. Every time I’ve taken her out, without fail, I’ve been approached by people who have been seduced by the curves and want to know what she is. Having spent a couple of months shuffling round in wood shavings, it’s great when people appreciate the kayak.
She seems to be very quick. In the absence of any proper trials, my anecdotal evidence is that whenever I put on the power, I’m able to leave buddies’ chined Greenland boats behind, far more so than in my other boats.