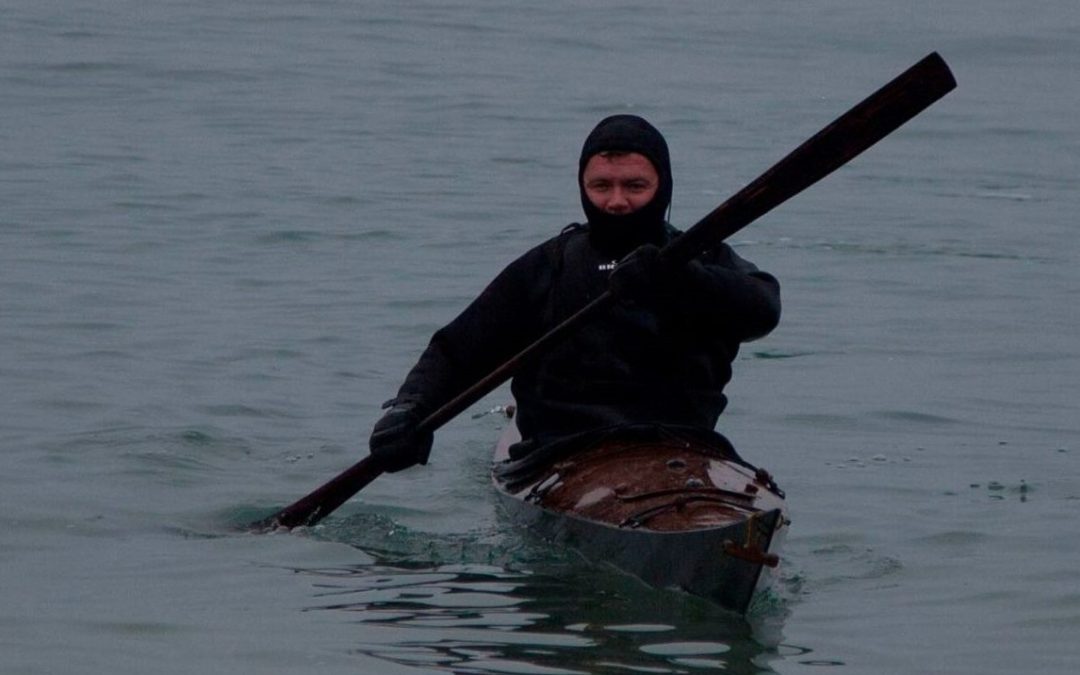 Alexandre Pavlikov was the builder of my boat. The base design is Shrike-R, made to fit me (6’1 or 184 cm and 230 lbs (105kgs) weight at the time). For that Alexandre made the following adjustments. The masik was raised 40mm to fit my feet (size 12) and also to increase buoyancy which changed the front deck curve a bit. The back deck was also raised by 20mm from the spec minimum to improve floatation. The material used was local 4mm/3mm 3-layer spruce plywood (regular, non-marine type). It was covered by glass fiber of 180g/sq.m and painted and varnished to give it a ‘darker’ look. Other mods included Alexandre’s own design hatches – secured by built-in bolts and modified nuts. The front hatch is large but there is no back hatch at all, only a small day hatch. There is an opening for ventilation in the bulkhead in the day hatch with a screw-on lid (from a lacquer canister). The front cockpit bulkhead is moved exactly to match my height. I believe because of that the bulkhead in the front was also moved and is not a full bulkhead, it’s more of a beam. The boat weighs 19kgs (42 lbs).

The boat is named Qatja (daugther’s name, spelled Greenland style), while Alexandre named his modification Shrike Rotattour (I think he fancied that it could be dual use – for rolling training and touring). My plan is to use it only for rolling and I do not imagine going touring in this boat albeit for short paddles in calm waters with my family. Theoretically with a lighter paddler one can go for a day-trip or an overnight in a very light set-up but it’s not my boat of choice for wavy conditions as it behaves like an ice-breaker then. It does track nicely in the wind due to lower deck and pronounced chines. Yet, I ordered the boat specifically for rolling practice and as a $450 alternative to a $3500 Waterfield Transam which was my next choice.

As we were going through the build, the lip of the cockpit back turned out to be too high so I couldn’t fully lay on the back deck which gave me some doubts that it’ll be good for rolling training. The build started in December last year and around January we realized that this was an issue. Alexandre and I agreed that he’ll finish it and I will test it once on water and if I do not feel that it is fit for purpose, he’ll buy it off me. He even started marketing the boat with a $500 price tag.

As soon as I got my Tulik delivered in March we took it to water and I rolled and sculled in it a few times. The boat was excellent. It rolled and sculled absolutely effortlessly. Now I do realize that it does compensate for my somewhat poor technique too. In fact it feels not that much different from Waterfield Transam SS I rolled a few months earlier in Japan. I came out of the water fully resolved that I am buying the boat. I was so excited that I decided to go for a swim in -2C water (salt water freezes at around -4C in these parts).

Further mods were made – some outfitting and cockpit. Nothing special – the seat is a mere piece of heavy duty styrofoam and paddler’s hips and back are secured by microcell foam blocks I ordered from Japan (thanks to Eiichi Ito-san!). If you think of it, the foam probably had the highest weight/$ ratio of all materials in the boat. However, it did help to solve the cockpit lip issue as I sit further towards the front in the cockpit. We also added custom thigh braces to fit me specifically.

I am genuinely happy that I went with this boat and want to thank you for bringing this project to life. For a places where funds are scarce, boats are not readily available it simply makes the sport available. I am pretty sure we’ll see more Shrikes built in the future.