Robin and Colin Hickman from UK 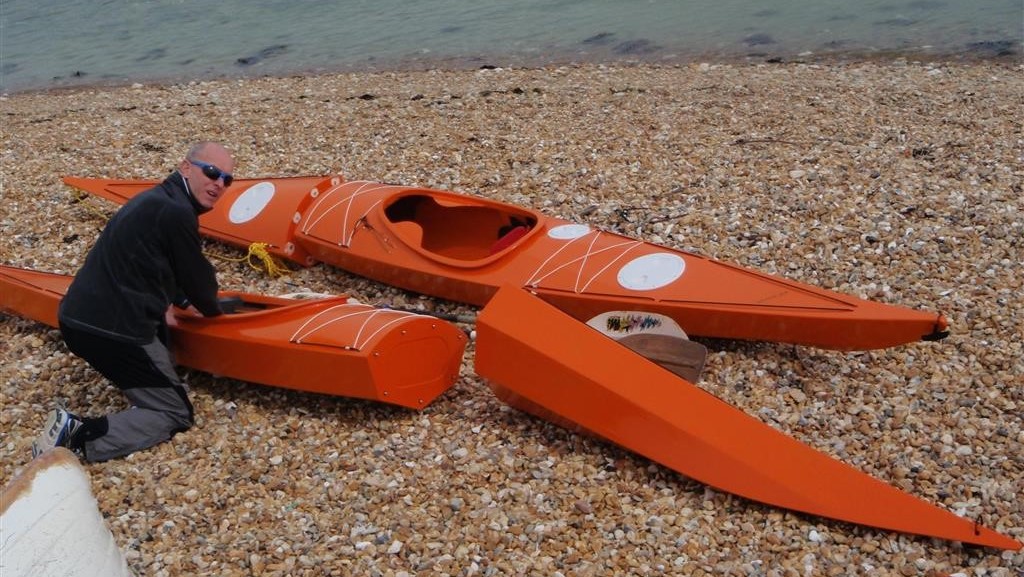 What model Shrike did you choose?
My brother and I built 2 identical Shrikes. We chose a standard Shrike scaled at 97% to suit our similar weights but with 5mm added to topsides. Full depth masik to give footroom. Overall length is 16.5 feet with ends rounded off. This will fit in my shed.
What modifications, if any, did you make to the design described in the Build Manual?
Main feature was the joint. The kayak comes apart at the foot bulkhead. This is to enable carrying inside a campervan. The joint is 7 bolts 8mm dia. There are 2 bulkheads here, heavily reinforced with carbon fibre cloth running along the keel, chines and gun’l from the bolts both forward and aft. Sealing is with a thin disc of silicone applied at each bolt. I estimate this joint adds about 1Kg. Captive nuts are in the forward section and bolts are inserted from the cockpit.
Another mod was a forward hatch in the deeply curved foredeck. This was achieved by producing a quite large flat ended cone, using part cut through ply – as with the cockpit coaming. This was bonded into the deck and then trimmed off. Thus a flat plastic hatch could be fitted.
The after deck is also raised 50mm. Not sure yet if this was sensible with regard to rolling!
I copied the cockpit shape from an existing boat, maintaining convex curves all round to avoid deck ‘popping off’
What is the weight of the finished kayak?
18.5kg. That is with joint bolts, footrest, skeg, 3 hatches, bottom skinned with 100gm cloth, with an extra layer under cockpit and a layer inside cockpit. 2 coats of 2 part polyurethane paint from www.arcritepaints,com, flush maroske deck fittings and all deck lines.
How does the kayak perform on the water?
With full length vee the boat is quite wobbly, compared with craft which flatten amidships. Soon adapt to it and there is that ‘ledge’ at 15degrees or so each side. Turning is good and the skeg is very useful. Still to try bigger waves and rolling. Very pleased so far – and I can pick it up!