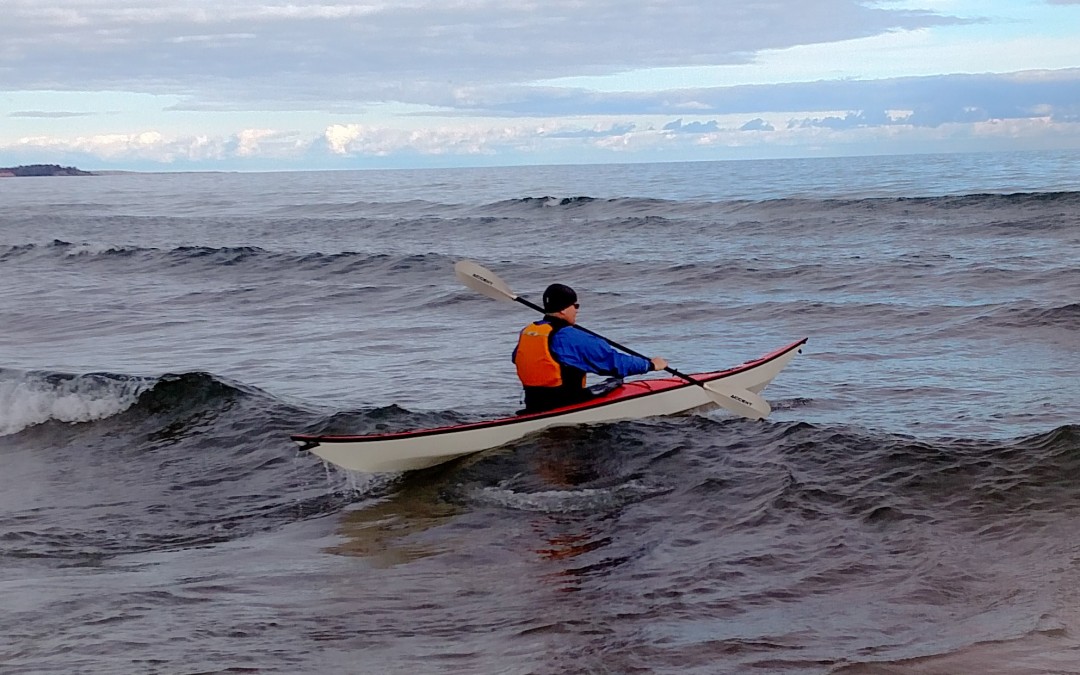 What model Shrike did you choose?
Standard Shrike with the keyhole cockpit.

What modifications, if any, did you make to the design described in the Build Manual?
I decreased the overall width of the Shrike by ½”. I added ½” of freeboard, which also added a couple of inches to the overall length. I decreased the masik height to 11.5”. The higher shearline and lower masik allowed me to decrease the curvature of the foredeck.
I added two additional bulkheads to get more flotation if the hull were ever penetrated and to create small storage spaces fore and aft for lighter-weight items. I designed carry handles based on Nigel Dennis’ design but with a small-diameter bungee inserted into the center of a hollow-core polypropylene rope so the handles would stretch out when used and contract when not in use. It works pretty slick!
I designed my own rope-actuated skeg weighted with a brass bar so it wouldn’t float.
I narrowed the front of the keyhole cockpit and added some cedar knee braces underneath, coated with blackened epoxy.
I custom-made my coaming so that it was convex at every point along its perimeter, which I felt would make the skirt fit more tightly.

What is the weight of the finished kayak?
Mine is heavier than most at 52# (23.5 kg). In fact, I may have the world’s heaviest Shrike! I wanted it to be STRONG. As mentioned, I added two additional bulkheads. I also coated both sides of every joint with an epoxy fillet and glass tape, coated both the inside and outside of every seam in the deck and hull with tape, and glassed the entire inside of the hull. I glassed the entire exterior of the hull with 6 oz cloth and the football (bottom of the deck) with two layers of 6 oz cloth. I used 4mm marine plywood for the hull. I made my masik out of 4 thin layers of maple laminated together to make the front deck strong enough to sit on. All of these modifications came with a weight penalty, but it is still within 1-2 pounds of most professional fiberglass boats costing $3000+ and I bet it’s stronger.

Any tips you’d like to suggest to future builders?
The only reason my kayak turned out so well was because I was so willing to fix mistakes. I feel like I botched every single step, but I painstakingly fixed everything before I proceeded to the next step so there are no obvious flaws in the final product. The lesson here is not to be afraid of screwing up—you will! There is no such thing as a mistake that can’t be fixed.
I made sure the hull was absolutely symmetrical before I glued anything permanently. I did this after attaching the shear clamps. I stretched a mason’s line from bow to stern and measured from that line to many, many points along the hull. I also checked the hull’s angles with a clinometer (you can get an app for your smart phone to do this) and compared many points port and starboard to make sure they were exactly the same. Once everything matched up perfectly, I made my fillet joints and glassed over them.

How does the kayak perform on the water?
It is very maneuverable, turns easily for its length, slips through waves like a torpedo, carves well on edge, and it has very low initial stability which makes it more nimble in waves. The hard chines give it some good secondary stability, which you’ll appreciate in waves too. All in all, this is a boat I’ll grow into rather than grow out of.