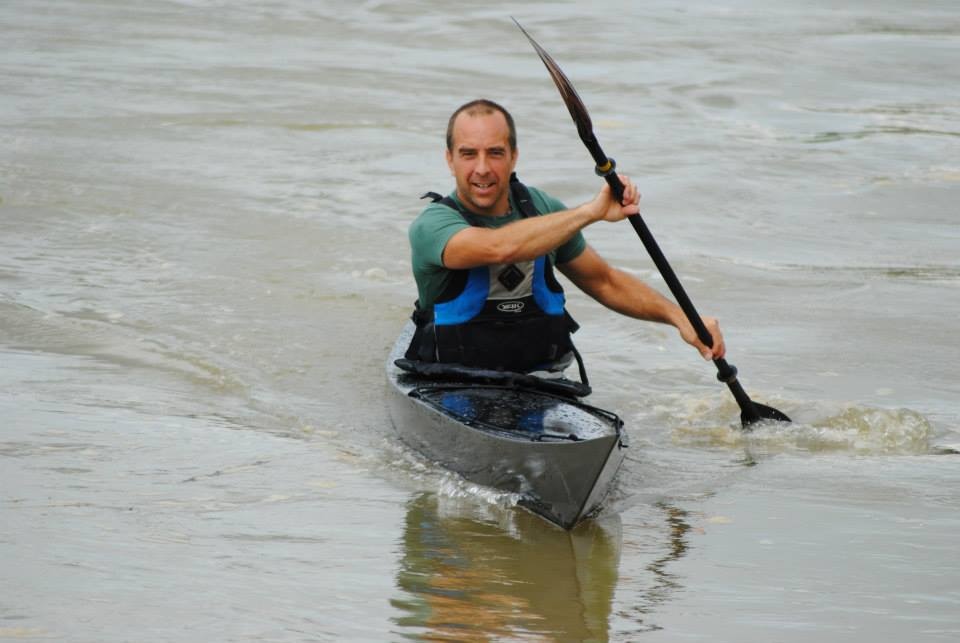 What model Shrike did you choose?
Full size Shrike with keyhole cockpit

What modifications, if any, did you make to the design described in the Build Manual?
I opted for the lower foredeck beam (masik) as for Shrike Too.
Modified skeg wire system as described under the Builders’ Tips tab.
What is the weight of the finished kayak?

Anything you wish you had done differently?
I wish I’d opted for a clear finish, as this looks so good, rather than paint.
Next time (!) I’ll place the cross beam support for the skeg box behind the wire fitting, to allow easier access for tools to the metal fitting.

Any tips you’d like to suggest to future builders?
The super-glue and accelerator is magic for tacking parts together.

How does the kayak perform on the water?
I’ve spent a fair bit of time paddling her now and it just keeps getting better and better. I was out yesterday in 30-40 mph winds and she behaved impeccably, so responsive to every command and correction. I’ve just got back in tonight from the best rolling session I’ve ever had – in just 3 sessions the Shrike has taken me from only just being able to force one roll at the end of the first night to doing nearly an hour of continuous rolls with NOT ONE wet exit! I’m absolutely buzzing. I love this boat.

Six months in my Shrike

I know you’ve all been there too. Pebbly beach launch, not quite lined up, you can see the next wave coming, can’t get drive, BOOM. Next thing you’re being pounded sideways up the beach by the breaking surf.
In a plastic boat you give it a big shrug of the shoulders, no harm done and start again. In a composite boat, the stress is somewhat higher, you jump out and scan the hull quickly to check that the awful scraping sound hasn’t actually caused too many gouges, then you start again.
When it happened to me in my recently built PLYWOOD Shrike, I was convinced I was about to have a lovely pile of nicely mashed fire wood ready to spark up and keep me warm on the beach. The panelling on the Shrike is 3mm marine ply, this stuff can be easily snapped between just finger and thumb, so when the surf finished grinding me up the pebbles and shingle of Shoreham beach I was astonished to find just three little scratches in the paint on the underside. Amazing.
I finished the home build Shrike last July. At the time of build completion I was very enthusiastic about the design based purely on the joy experienced during the build, and the visual appearance of what I perceived to be one of the best looking kayaks I’ve seen. Since then I’ve paddled a good number of sea miles in her and have had a great six months to reflect on my opinions.
So what do I think after six months? Quite simply it’s a fantastic kayak. I’ve been out in all sorts of conditions, playing in the surf, paddling flatwater down the river, offshore in hard winds, knocking the ice off it in the cold stuff, and so on. It’s taken everything in its stride and just comes back for more. My favourite aspect of the handling is the agility, being just 15kg and hard chined the hull responds to every little input and edge, I feel so connected to the boat when paddling. The low weight is a prominent factor in nearly everything action with the Shrike; when carrying from the car to the launch I hardly notice her on my shoulder; when rolling, the boat inertia is negligible, and when wanting to put in a burst of acceleration the boat speed picks up almost straight away. On the other side of the coin, I do find that in chop and clapoitis the Shrike is ‘bounced’ around a fair degree more than I think a heavier boat would be.
The designers, Chris and Nick, drew the Shrike up with rolling very much in mind, and in this regard the shrike has been a revelation for me. It’s taken me from a ‘managed to roll in a pool a few times a while ago’ paddler to someone who now has a fair good reliable roll. To the point now that I’m starting to look at developing beyond just ‘having a roll’ and now working on different types of roll i.e. forward finishing, storm rolls etc. It’s all early days for that stuff and defiantly work-in-progress, but it is undoubtable progress. I do feel a slight sense fraud in one area unfortunately – I have tried and (at this time) can’t seem to get on with the Greenland paddle! Its seems almost sacrilege to not use a GP when paddling a boat of this style, but hey, each to their own and at the moment I’m happy to focus on skills development in other areas. Something to work on in the future 
I’ve not yet been out for an overnighter in the Shrike, this may be an area that is found to be slightly wanting – there’s not a great deal of storage, so the travelling light concept will have to be employed to ensure the essential trip gear can be carried. This shouldn’t be considered is a negative point, just an aspect of a low volume kayak that needs to be taken into account. I have packed what I consider to be all the essential overnight gear, then taken it up river to investigate handling effects and how it would roll – if anything the roll was easier (but that’s on a placid river) and the handling just a tad more restrained, everything happened the same – just a little slower. I’m looking forward to some weekend bivvy trips over the summer.
Things I would change on the ‘next’ build? I would like to give myself a little more legroom. This could be achieved by raising the Masik a little and then increasing the top edge of the footrest bulkhead correspondingly. I would probably take a hit on the weight slightly and glass the whole of the outside of the bottom of the hull. Even though she stood up to the surf pounding I described at the start very well, I’m constantly mindful of the hull fragility when I’m paddling – a layer of glass would add some (a little) peace of mind.
My early positive impressions of the Shrike have been constantly reinforced and added to. I’m totally chuffed to have built, own, and paddle this kayak. My advice is the same now as it was at the end of the build – if you think this might be the kayak for you then go don’t hesitate, build one and go paddling in it.
It is such a rewarding experience in every way.